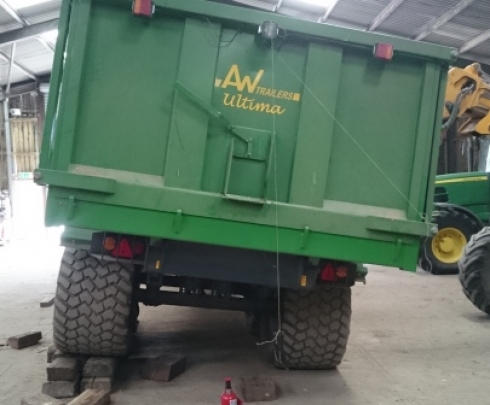 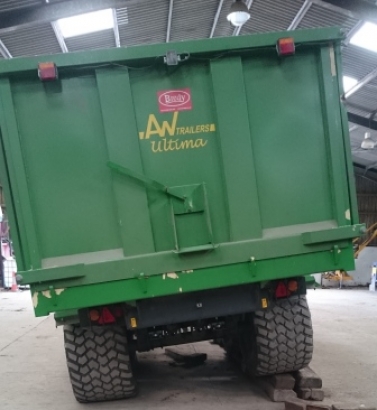 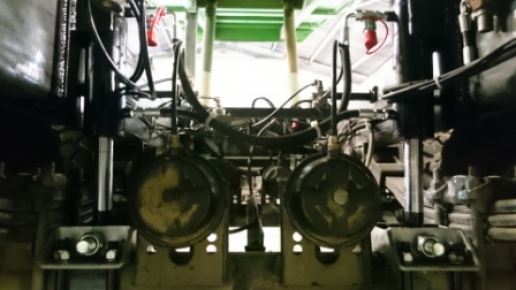 A self-contained two-cylinder hydraulic circuit for each axle, which is able to limit the variation in leaf spring flex so that one side of the trailer cannot drop or rise any more than the other – if one spring goes up, then the other one does, too.

The system can be supplied in kit form and fitted to your existing trailers.The kit is a closed hydraulic system consisting of two 'Hydrapowered' suspension cylinders, two hydraulic hoses, along with fittings and brackets on each axle. There are no electronics, pumps or valves so maintenance is minimal.

Following these trials the owner offered to take the trailer, that was loaded with 15.3 tonnes of grain and fitted with the new load stability system, around one of his fields that has a side slope of nearly 13 degrees. The pictures below demonstrates this. He was not prepared to risk taking the other trailer around the same field.

Fitting the system to this trailer means that the owner can now unload his Hillmaster combine on side slopes that previously wasn't possible.

We had two AW grain trailers both with the same ADR running gear, wheels and tyres. To one we fitted the 'Hydrapowered stability system' the other we left standard. Each trailer was then loaded with 15.3 tonnes  of  wheat and reversed up onto an 8 degree side slope we had constructed.

Trailer without the stability system 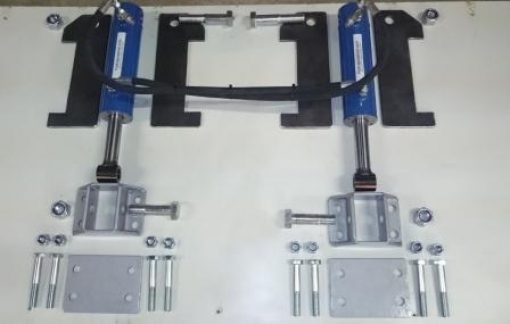 Hydrapowered have developed a new retro-fit hydraulic system that improves trailer stability on side slopes and when cornering wth loads.

There is increasing pressure to maximise every available piece of productive land with the minimum amount of labour.  This has led to farmers using higher capacity machinery with the technology to follow the ground contours.  To enable the crop to be transported more efficiently trailers are now larger and have to travel faster.  This requires trailers to be fitted with suspension and an appropriate braking system.

To comply with current regulations most modern trailers have been fitted with commercial trailer axles.  Although these axles work effectively in normal conditions, agricultural trailers are more unstable due to the way they are coupled to the tractor and the topography of the land they are used on. In addition there is a requirement to keep ground pressure to a minimum and the use of larger tyres has led to greater instability. 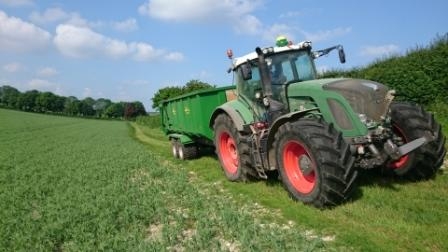 To build the system, we use two Hydrapowered suspension cylinders with a compression section in part of the stroke as run-of-the-mill rams simply won’t work.  The idea is that the oil pressure on the downhill side of the trailer tries to compress the spring on the uphill side.The springs carry the weight of the load and the trailer body moves up and down as originally designed, this means the load sensing for the braking system still functions as before.

When on a side slope, our research found that it was not the spring on the lower side compressing more but the sping on the upper side decompressing that caused the increased angle on the trailer body. It was this research that led us to develop a system to restrict how far 'out of parallel' the springs can go and stop the spring, with the less load, decompressing.

The ram reconfiguration allows the cylinders to be able to drift out of parallel when the trailer is empty and the system is at low pressure (about 3bar), but variation is restricted between the two as the pressure rises to its maximum. It means that as the trailer is loaded it still has the vertical flex of the two springs, but it also increases the oil pressure to restrict the side-to-side rocking motion that can cause so many problems across steep banks and when cornering. Another advantage is during tipping – as the weight is shifted to the back of the trailer the suspension stiffens up and improves stability as the centre of gravity rises.

U-bolts or bolts and a plate clamp the lower brackest to the axle, then the cylinder is bolted to this bracket, the top brackets are welded to the main chassis. With the main metalwork in place, the system can be hydraulically charged this is best done  with a full load to make sure it’s tuned to cope with the sort of weight the trailer will be carrying on a regular basis.

When the system was field tested it managed to negotiate side slopes of up to 15deg, with a full load, without any trouble.

A division of RDBS Engineering Ltd